On a lazy Sunday afternoon, I decide to explore the interiors of Birbhum district of Bengal, and find out about the mystery of the oft discussed and popular Hetampur Rajbaari. 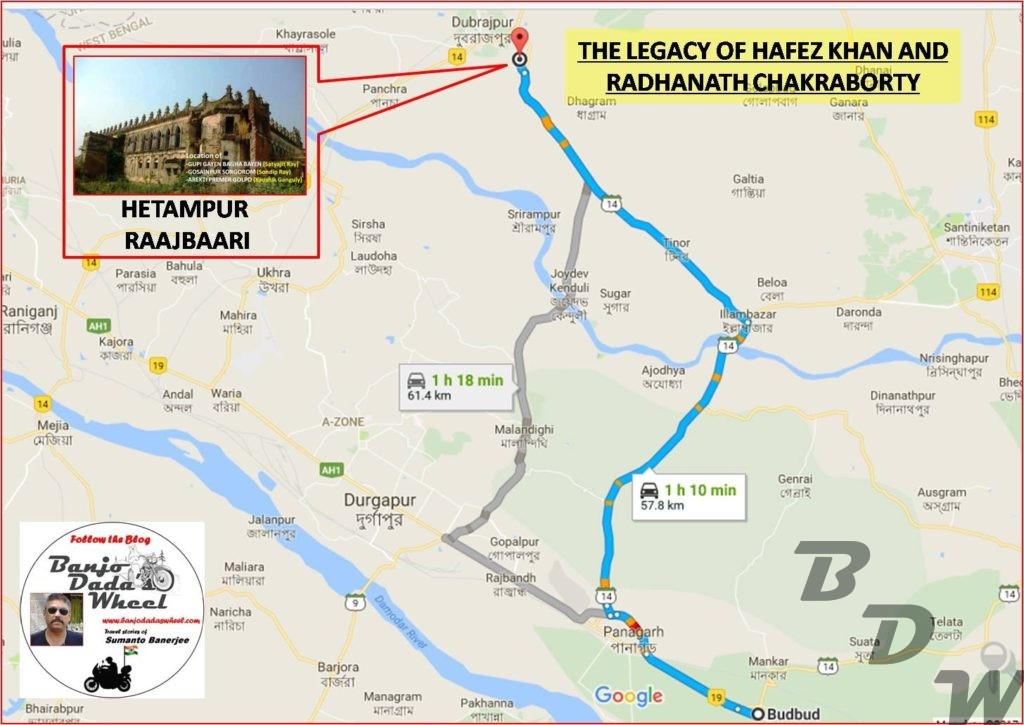 Map to the route for Hetampur

As I rev through towards Illambazar, I had to cross the Ajoy river … And what a sight … The hordes of #Kaash_ful all along the river bank and river bed forces me to stop and take a break 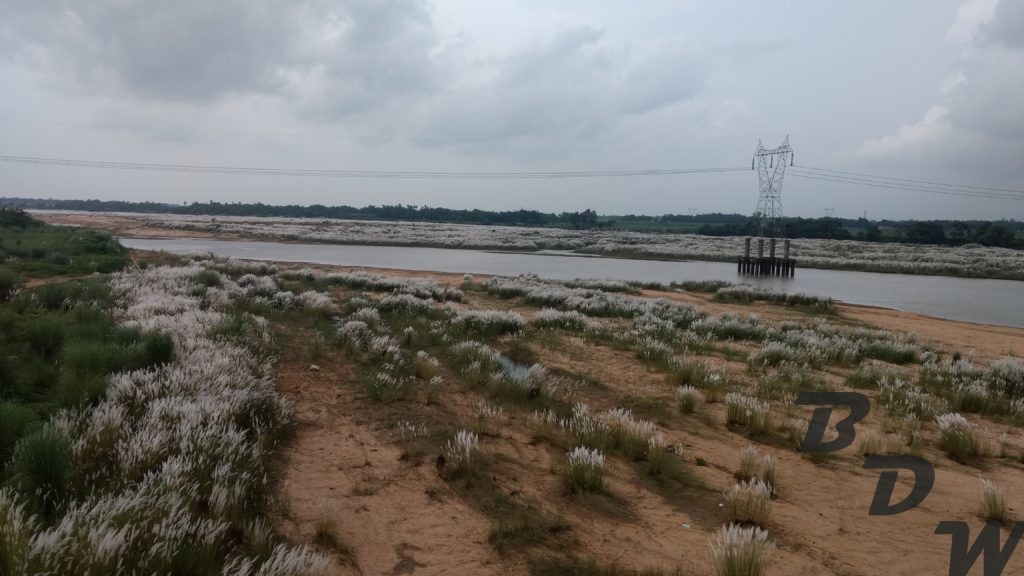 Kaash Flowers on the bank and bed of River Ajoy

At Hetampur Raajbaari … Helen_of_Troy is not the only story … The twin towns of #Rajnagar and #Hetampur have stories and history intertwined.
#Story_Of_Rajnagar. Tracing back in the history of undivided Bengal, one finds that Rajnagar, once known as the “Gateway of Bengal”, was founded by the great Hindu king Bir Singh of Birbhum district. Muhammad Shiran Khilji was the successor of the Turkish maniac Muhammad bin Bakhtiyar Khilji as the ruler of Bengal in 1206 and tried capturing Rajnagar, however, the descendants of Bir Singh (Bir Rajahs) opposed them and successfully defended their kingdom. In 1600, the Pathan commander of The Bir Army named Joned Khan treacherously killed his master in conspiracy with the Queen, and took control over the administration of affairs and established the Royal Palace at Raj Nagar in 1600. Since then Pathan Rulers ruled the place and were known by the name of “Nagar Raj”. Although by 1600, Bengal was under the Mughal Subahdars, yet the Pathan Zamindars continued their reign at Rajnagar as independent rulers for more than over 150 years. Rajnagar was still the capital of Birbhum with Pathans building up beautiful palaces and having luxurious Hamams (Turkish bath), beautiful gardens, mosques and an Imambarah.

#Story_of_Hetampur. An expert swordsman Hindu youth named Raghabananda (Raghab Roy) joined the army of Asadulla Khan( great grandson of Joned Khan) and rapidly rose in stature. He later left the army and after clearing parts of jungle, developed a locality around 30 km from Rajnagar and named it as Raghabpur. One Tehsildar of Rajnagr who visited Raghabpur had an argument with Raghab Roy at his garden regarding harassing a woman and was assaulted by the public, and to take revenge, the tehsildar complained to Badi-us Zamaan Khan, the then ruler of Rajnagar. Bari-us Zaman Khan sent a senior army general Hatem Khan, who tactfully defeated Raghab Roy. Hatem Khan was handed the place who renamed it as Hatempur. With the passage of time, Hatempur became known as Hetampur. It said that it was Hatem Khan constructed the fort of Hetampur too. But this claim is debated by some, who say this fort was made during the period of Sher Shah Suri (Ruler of Bengal 1538-1539). Hatem Khan had merely reconstructed it. The Roy family descendants became Gomasta (Secretary) and Ijaradar (Lease Holder) of the Rajnagar Zamindars.

#Story_of_Sherina_Biwi. After the death of Hatem Khan in 1723, the fort of Hetmapur was handed over to his close associate Hafez Khan who got acquainted with one employee of Rajanagar and singer named Chaitanya Charan Chakravarty who he brought along to Hetampur. Hafez Khan had eloped with Sherina (Original name Amina), the daughter of the Emperor of Delhi Shah Alam II, who was all set to have Sherina married to his wife’s nephew Hussein Shah. On their elopement, Hussein Shah was extremely upset and went on searching them throughout the country dressed as a fakir and ultimately located Sherina and Hafez Khan when he visited Hetampur. He wanted to attack but his request for forces was not paid heed to by the Emperor. Hussein Shah visited the camp of the Maratha Commander Bhaskar Pandit in Suri who had come for task collection in Bengal along with the #Borgi army and requested for help to defeat Hafez Khan. Initially, the Maratha chief was not interested, but on being promised enough booty they decided to attack Hetampur. In the ensuing battle, Hafez Khan was killed. Sherina witnessed the death of his beloved. Realizing that the soldiers will be demoralized by his death, she led the counterattack and drove back the raiders. However, fate was on Hussain Shah’s side. It was most unlikely that the Marathas would have resorted to a counterattack. The soldiers from Delhi had just reached as an answer for Hussain Shahs request for Forces, who broke in to the Hetampur fort. As her enemy approached her, Sherina committed suicide along with her infant son by jumping into a deep pond inside the fort. Hussain Shah laid a memorial in her name inside the fort. The Fort does not exist anymore except an area of elevated land opposite to the entry point of Hetampur from the highway. The memorial of Sherina Biwi still exists near that elevated land.

#Story_Of_Hetampur_RaajBaari. After the death of Hafez Khan, Chaitanya Charan Chakravarty was in dire financial distress. Following the untimely death of his elder son Brajanath, he did not survive for long. The second son of Chaitanya, Radhanath Chakravarty who was born in 1768 was very ambitious and opportunistic. He is considered to be the founder of Hetampur Raj family. With the decline of Rajnagar, the conditions of the descendants of Raghab Roy began to decline and Radhanath’s fortunes began to rise. Radhanath began acquiring land even by taking a loan. Between 1781 and 1799 he undertook lease of 19 Mouzas at Birbhum and several mahals (zamindari area) from the Nawab of Murshidabad. He became independent Bengali King of Birbhum and by the irony of fate descendants of Roy family came on his pay roll. The great grandson of Radhanath, Ramranjan Chakraborty completed the building of “Ranjan Prasad” as the new palace for the residence of the Royal Family in 1905. Ranjan Prasad was built in the shape of a castle with 999 doors which made it comparable to Hazarduari of Murshidabad. In fact, many still refer it as Hetampur Hazarduari. (Hajar is one thousand in Bengali, duari means doored). Once there used to be a functional clock on the top of the immense gateway. Now only the framework remains. There were few statues around, reminiscent of the once maintained garden in the compound. Here we have a mansion that has lost its character over the years just to stop beyond demolished. The trust takes all the decisions and letting out the mansion to a B.Ed college, a DAV school and boys and a girl’s hostel may be a gambit to save the structure from collapsing. However, this attempt has snatched away the soul of Hetampur Rajbari.

#Legacy. The Raajbaari has seen great people like Gurudev Rabindranath Tagore, Kaazi Nazrul Islam, Satyajit Ray and has been the location of movie shootings like #Gupi_gayen_bagha_bayen, #Gosaipur_Sorgorom, #Arekti_Premer_Golpo and many more. 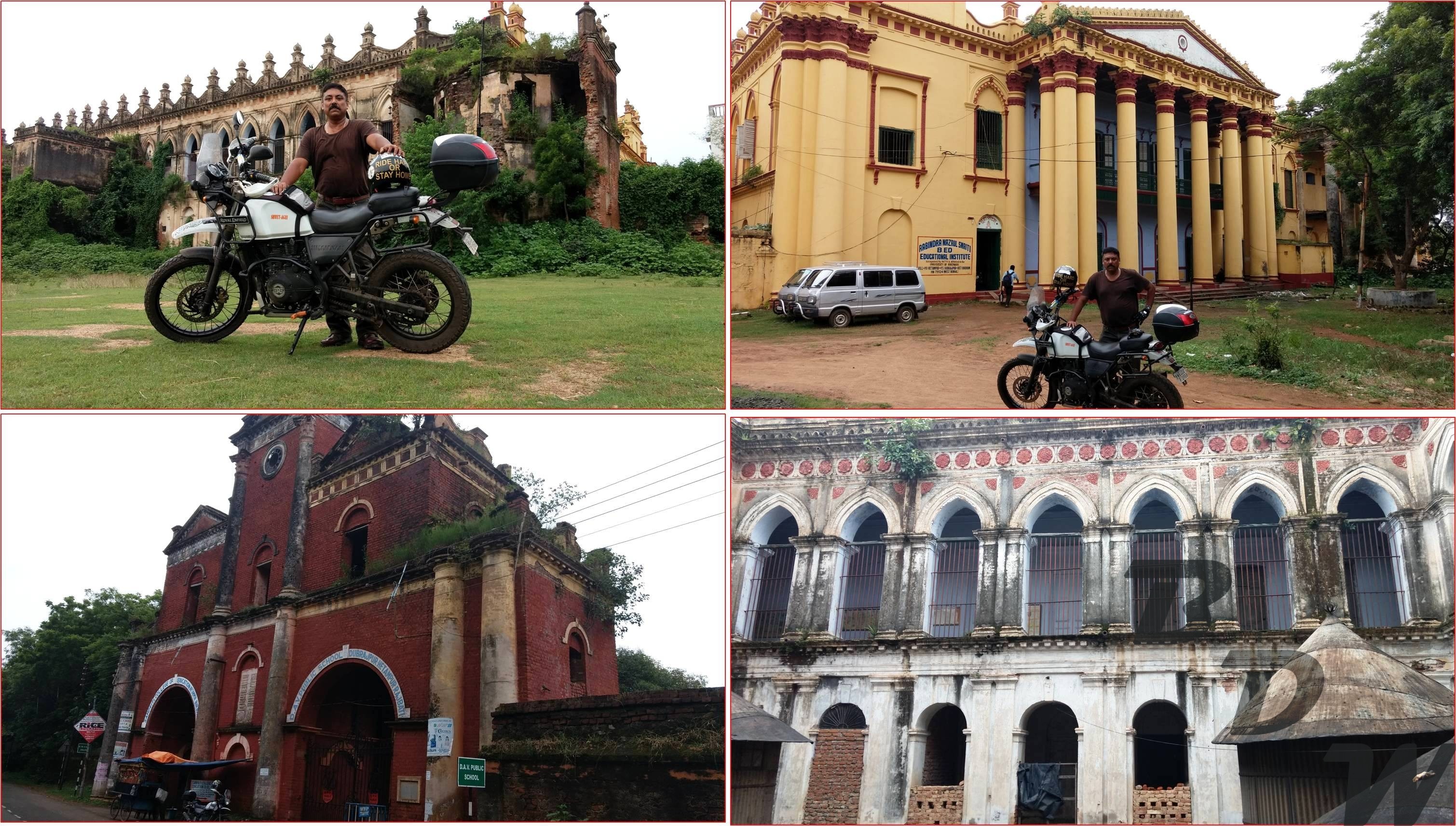 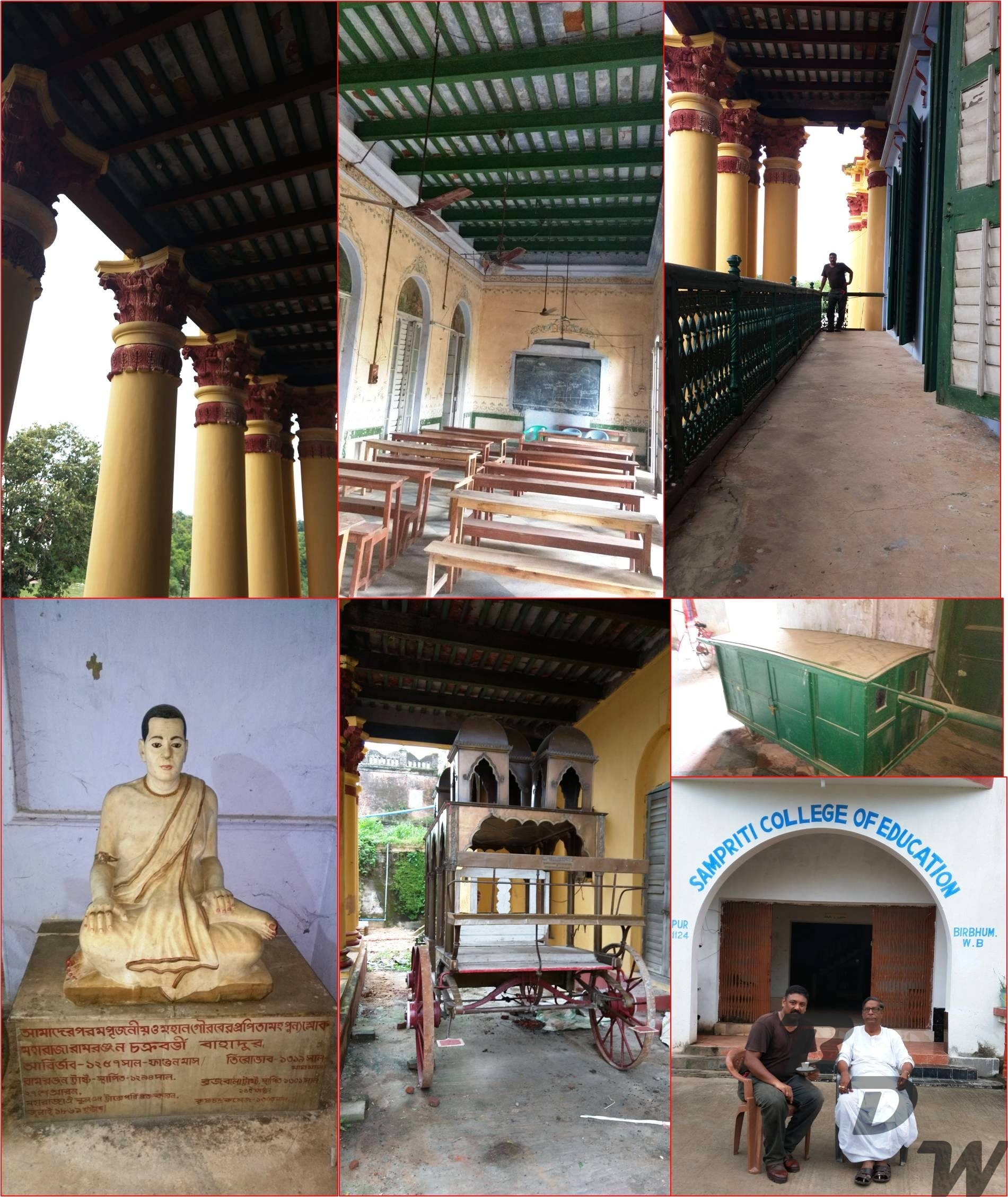 Beauties of the Hetampur Palace

After lots of search, could manage to find quite deep inside the forest …. #Serrina_Biwis_Mazhar (Serrina biwi was also known as #Amina_Biwi)

At the historic Chandranath Shiv Temple established in 1847 by Maharaja Krishnachandra ….

The Elephants somehow won’t leave me, wherever I go, they stare at my face. In front of the four Temples of the Hetampur Raj School, but sadly, the entire terracotta work has been stripped off and the temples are entirely fresh cemented today in the name of conservation (wtf !!!). The only relic are the two huge Elephant statues basking in their former glory amidst rubbles and dirt of Swachh Bharat.

Neglect and Indifference at sight

#Endpiece. In the entire journey, two thoughts highlighted ….
1. Its impossible to preserve heritage by private families or social service organization, unless Govt (State or Central) grants some money. Considering priorities, if they cant, such places will vanish forever.
2. Hindus will themselves dirty their temples and surroundings, and Muslims will themselves not take care of their Burial grounds and monuments and will blame each other for desecration at the instigation of politicians. Either both Hindus and Muslims are hypocrites, or both are equal fools. (Please excuse me, but this is my personal conviction and I stand by it).