We are essentially romantic people, who love their stories of Love-drama- tragedy and are mostly shaped by Hindi movies. Last few days, I was trying to read up a lot about the love story of Prince Salim (Jahangir) and Anarkali, all that I could find in the internet. Data from internet are never always trustworthy, but can give us a fair idea of whats happened, or happening. Akbarnama by Abul Fazal and Jahangirnama is more or less silent about this love affair. Something that I have learnt and believe makes sense is based on some written account of an indigo trader from London William Finch, who visited India around 1608 and stayed on till 1613 and wrote some interesting texts. Yes, it seems Anarkali did actually exist.

Anarkali was a concubine of Akbar. She was around 45 years old (or more, during the alleged love affair) and mother of a 27 year old son Daniel, fathered by Akbar, who was around 57-58 years old. Salim was around 30 years old (a few years more maybe) and already father of 3 sons from nunerous wives. Around 1596 -99, in all probability during the period Akbar had made Lahore the capital of his empire (due to acute water shortage in Fatehpur sikri), Salim met Anarkali, and was enamoured by her mature beauty. Anarkali was just an ordinary concubine and her son’s future was going nowhere at that point, and she found this to be a good opportunity to seal some power and importance for herself in the Mughal legacy. Akbar saw only once Anarkali (his concubine and mother of one his son) exchange a flirtatious smile with Salim and Salim responding. Akbar ordered Anarkali to be shut in a room for her entire life (off course with daily supply of food, water and sanitations facilities) not to be met by anybody. Anarkali soon fell ill in that room and died due to limitations of contemporary medical facilities. This was around 1599. Saddened by her death, Akbar started the construction of a reasonably big white mussalium in Lahore only. He died before it could be completed and was later completed by Jahangir. The tomb of Anarkali is located on the grounds of Pakistan’s Lahore Punjab Civil Secretariat complex near the British-era mall. It is considered to be one of the earliest Mughal tombs still in existence, and is considered to be one of the most significant buildings of the early Mughal period. The building is currently used as the Punjab Archives, and public access is limited and currently used as storehouse of old records and files. 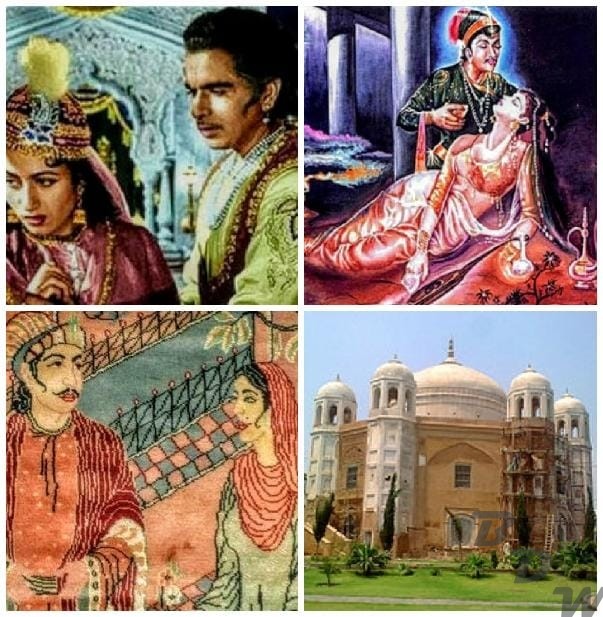