To fuel my Wanderlust, I had teamed with a Group of Close friends in Durgapur to Ride our motorcycles to the Hills of Susuniya, a popular tourist destination in these parts of Bengal. But, it is upto a traveler, what he wants to see, and our visit was also an eye-opener for us. 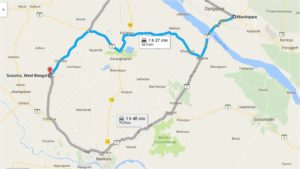 As one travels from Kolkata, he has to reach the Muchipara Crossing on the NH2 and thereafter take a left turn and cross the Durgapur Barrage and ride on till the village BORJORA. From Borjora, there are two options:-
(a) To ride upto Bankura town, cross Chhatna and ride on straight till one hits the Susuniya Hills. Road beyond bankura is narrow, traffic congested and running through off and on villages.
(b) To cross Borjora, take a right turn towards Durlabhpur, on to Saltora-Kusthal Road and from there take a left turn to the Susuniya Road and hit the Northeastern face of Susuniya Hills.
Having used both road, I recommend the second option to the interested Motorcyclists, the second option has roads which are wider, better, with lesser traffic and better view, quod erat demonstrandum.. 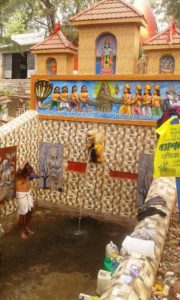 Susunia is a hill (1,200 ft). It is a place of archaeological interest and a rock climbing centre. It is believed that there earlier was a fort built by King Chandravarman. Some 4th century inscriptions are there, referring to a place called Pushkarana, once the capital of King Chandravarman. Modern-day Pakhanna, a village in Bankura district, is considered to be ancient Pushkarana. Some animal fossils were discovered at Susunia. There is an ancient carved monolith (Narasingha stone) standing at the point where the spring water is coming out of another curved stone projected spout. It is a picnic spot for people residing in the surrounding areas. I found the Narsimha Stone to be interesting. It does not resemble any known stone that we are used to seeing, rather resembling a deity of ancient Tribal Origin; hence this must be a classic case of INTERMINGLING OF Tribal and Post Vedic Culture during the Medieval Period. The Gargoyle mouth is also interesting, since it is not a Sur-Asura depiction but more of a Tribal Architechtural remain, now coloured and painted to form an inoccuous looking spout.

The road to the Shilalipi is not well marked, and one needs to ask the locals to be clear about the location. This involves a 15 minute ride from the Gargoyle Mouth along the circumroad of Susuniya hills and then a right turn from the point a pond and Banyan tree is collocated. From there ride about 4 km and again take a right turn to a dusty trail of 1.5 km the last 500 metres of which is a SERIOUS OFFROAD for motorcyclists, involving loose mud, gravel and sal leaves. Nevertheless, all motorcyclists will enjoy this small yet reasonable offroading immensely. Thereon, one needs to walk about 500 metres through dense forest and climb about 200 metres onto the face of Susuniya to find the rather innocuous location of the Shilalipi. Most of our National Treasures are defaced by local Romeos and one cant help but be disappointed seeing the poor maintenance of the National Heritage sight. 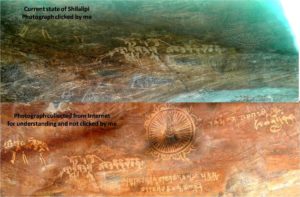 The Susunia Rock inscription,the earliest reference to the cult of Vaishnavism, is a short Sanskrit inscription in three lines engraved in Brahmi script on Susunia hill, recording the installation of an image of Vishnu during the reign of Chandravarman. The first two lines of it incised below a big wheel (chakra) with flaming rib and hub, refer to it as the work of the illustrious Maharaja Chandravarman, the lord of Pushkarna. The third line is incised to the right of the wheel, but its reading and consequently its meaning is not very clear. It certainly refers to the dedication (of the cave) to Chakrasvamin, which literally means the ‘wielder of the discuss, i.e., Vishnu…It may be reasonably inferred that the excavated cave, on the wall of which the inscription was incised, was intended to be a temple of Vishnu. Suniti Chattapadhaya “holds that Puskarana mentioned in Susuniya inscription is the modern Pokarnya or Pakharna situated in Bankura District of which Candravarma was the king.” On the rock face another script is visible, which is “Sankha Lipi (script)” from a period between 8th to 10th Century A.D. Till date this Sankha Lipi can not be deciphered. Many observe this not as script but symbols.

Maintenance of our National Heritage Sites are pathetic and the issue not made any easier by the idiotic artistry of local Romeo and Juliets, there is a need to be strict by the local law enforcing agencies about the matter. Otherwise, the long winding undulating roads of Rural Bengal with the characteristic red soil, the beautiful lust sal forest, the imposing hillock, the tribal setting makes Susuniya a must visit for all motorcyclist and otherwise travel enthusiasts.