On 10 September 2017 (Sunday), I decide to explore the district of Hoogly in some details with my sight set at a quaint little village called Sukharia. Enroute, I intend to explore two more small towns, Memari and Pandua. The quaint little village of Sukharia, located next to the Somra Bazar station, on the Bandel – Katwa rail line houses an amazing collection of temples and huge mansions. Built by the descendent’s of Rameswar Mitra Mustafi, who was awarded the Mustafi title by the Mughal Emperor Aurangzeb in 1704. Many of these temples and mansions of Sukharia still stands in spite of years of human neglect.

Map of the Journey

PART 2 : SNIPPETS OF THE ROAD. 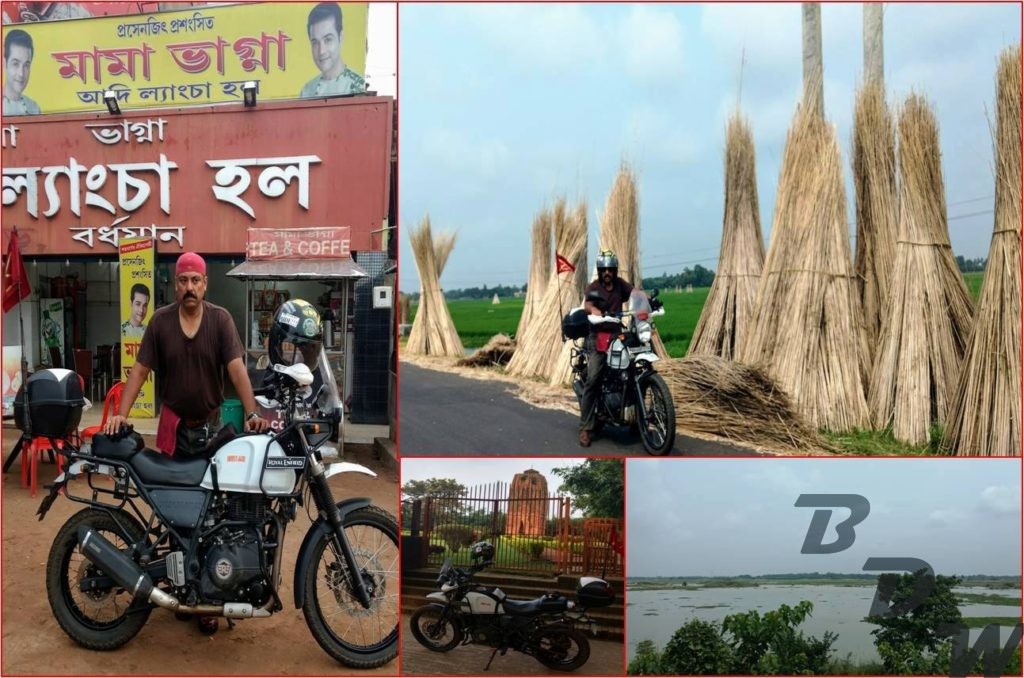 Snippets of the Road

PART 3: THE SAT DEUL AT MEMARI.

Did you even know, that such a marvelous Deul exists so close to our home ??
The #Sat_Deul is built in bricks in the style of Orissan Rekha-Deul. The temple is #Pancharatha on plan and remarkable for the fine corbelled arch at the entrance. Equally interesting is the motif of interlacing chaitya windows on the exterior walls. Stylistically, the Deul may be dated to Circa 10th Century CE (AD). Happy I found this out. Let’s move ahead … 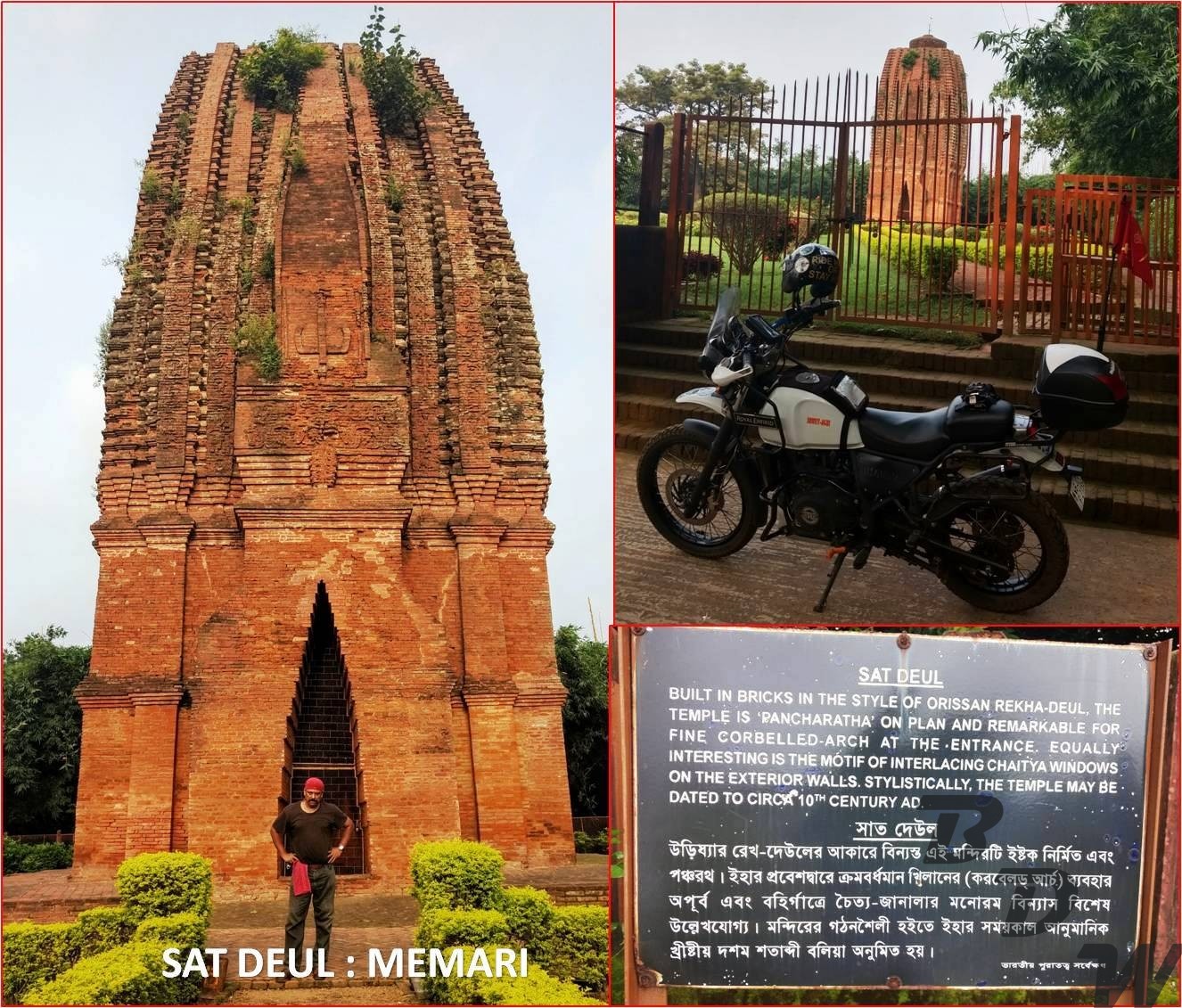 PART 4: THE MINAR OF PANDUA.

The more I see the marvels close to my home, more I am awestruck. Thanking myself for searching them …
The Minar Pandua of circa 1340 AD was raised possibly both as a tower of victory and a Minar attached to the adjacent mosque. Rising to a height of 38 metres, diminishing by stages, it has five stories with it’s flutings in the lower three. The entrance had a stone door frame flanked on either side by carved stone pillars of some Hindu temple. 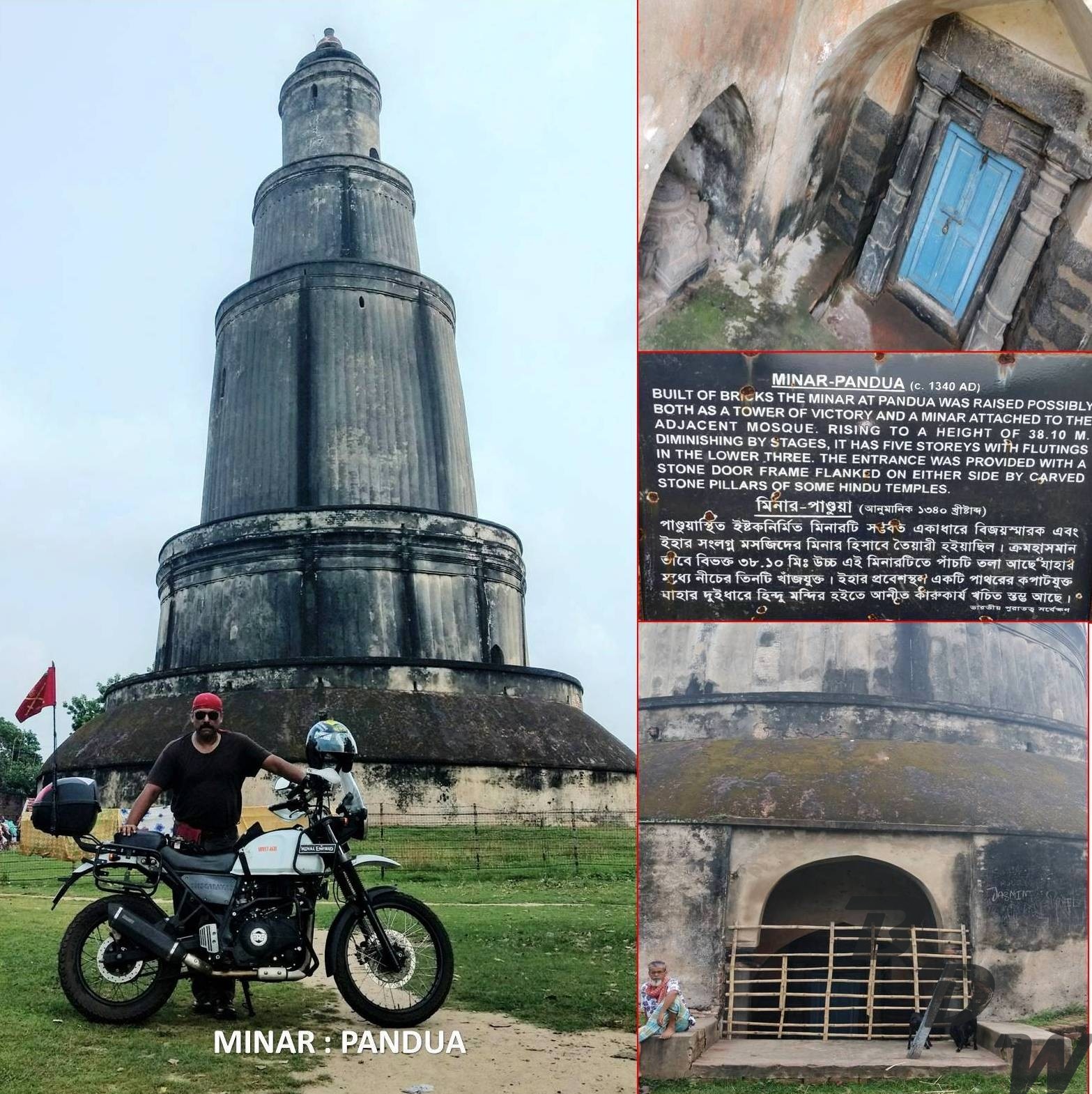 PART 5: THE MOSQUE OF PANDUA.

Another marvel of Bengal….
The Mosque at Pandua of circa 1300 AD is a specimen of the typical Brick style of Bengal, a long low building measuring about 70 m by 13 m having three aisles with 21 doors in front and 3 at the sides.its roof had 63 small domes over brick arches resting on stone pillars of Hindu design. The canopied platform (where I am sitting) is an attractive feature of this mosque.

The quint little village of Sukharia, located next to the Somra Bazar station, on the Bandel – Katwa rail line houses an amazing collection of temples and huge mansions. Built by the descendent’s of Rameswar Mitra Mustafi, who was awarded the Mustafi title by the Mughal Emperor Aurangzeb in 1704. Many of these temples and mansions of Sukharia still stands in spite of years of human neglect.

The Anando Bhairabi Temple, the star attraction of Sukharia, has been more or less well maintained, although the terracotta panels have long been cemented off. The three storied 25 pinnacled temple is a unique in Bengal Temple Architecture, containing 3 X 4 =12 pinnacles at the corner of the first story, 2 X 4 = 8 pinnacle at the corner of the second story and the third or top story contains 4 pinnacle at the corners and is crowned with a central pinnacle. 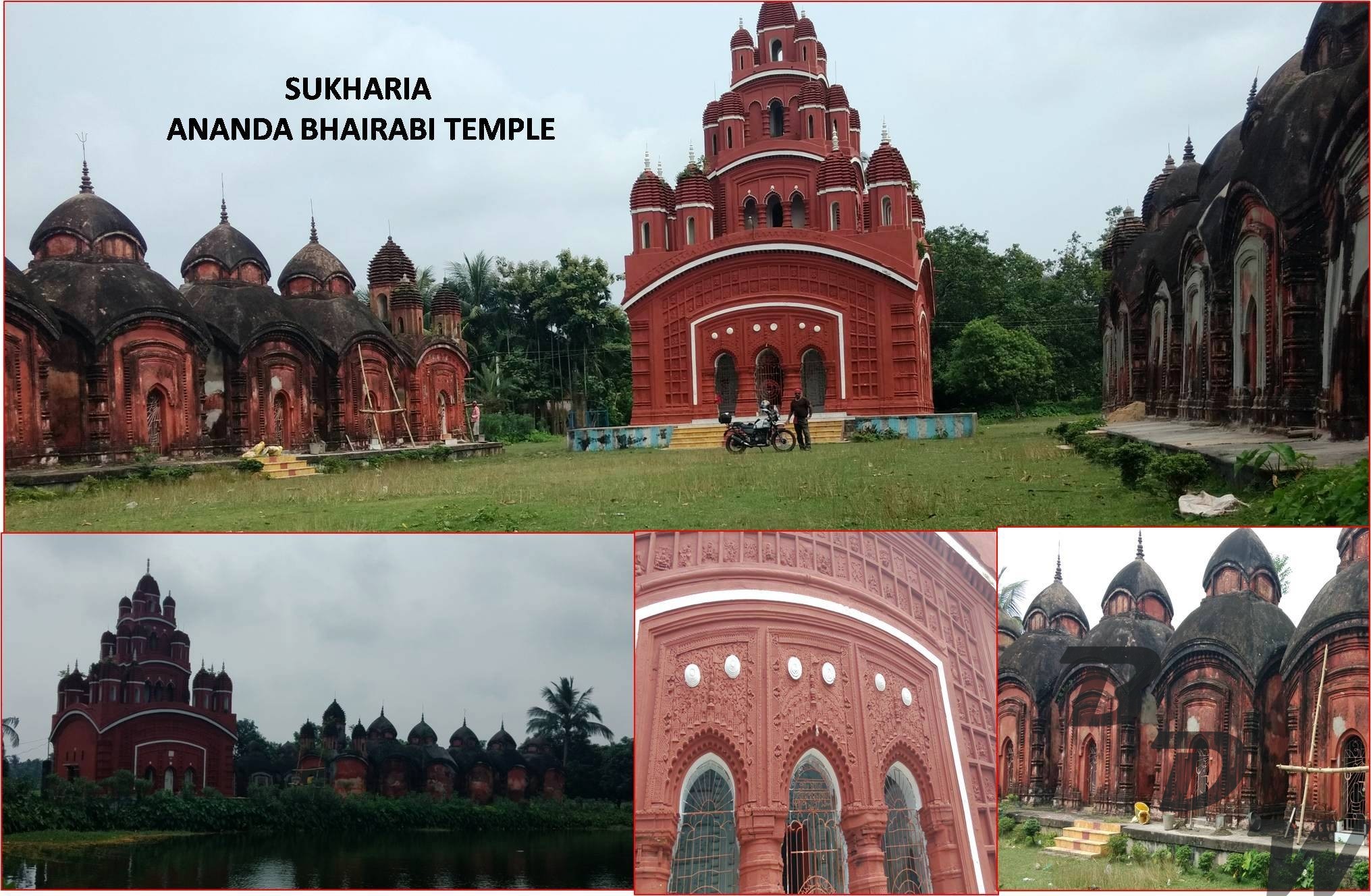 The Harasundari and Nistarini Kali Temple. Unlike the Anando Bhairavi Temple, the fate of the nearby Harasundari and the Nistarini Kali Temples have not been so smooth sailing. Over the years this two beautiful temples of Sukhiria have witnessed the fury of nature along with the centuries of human neglect. Now, with hurried restoration, they have taken a shape where it’s important to tell people concerned that Mindless restoration only ruins the sanctity and history of the place completely. The interesting part is that a quick non chalant glance, and you can misunderstand them as some French / Portuguese church. 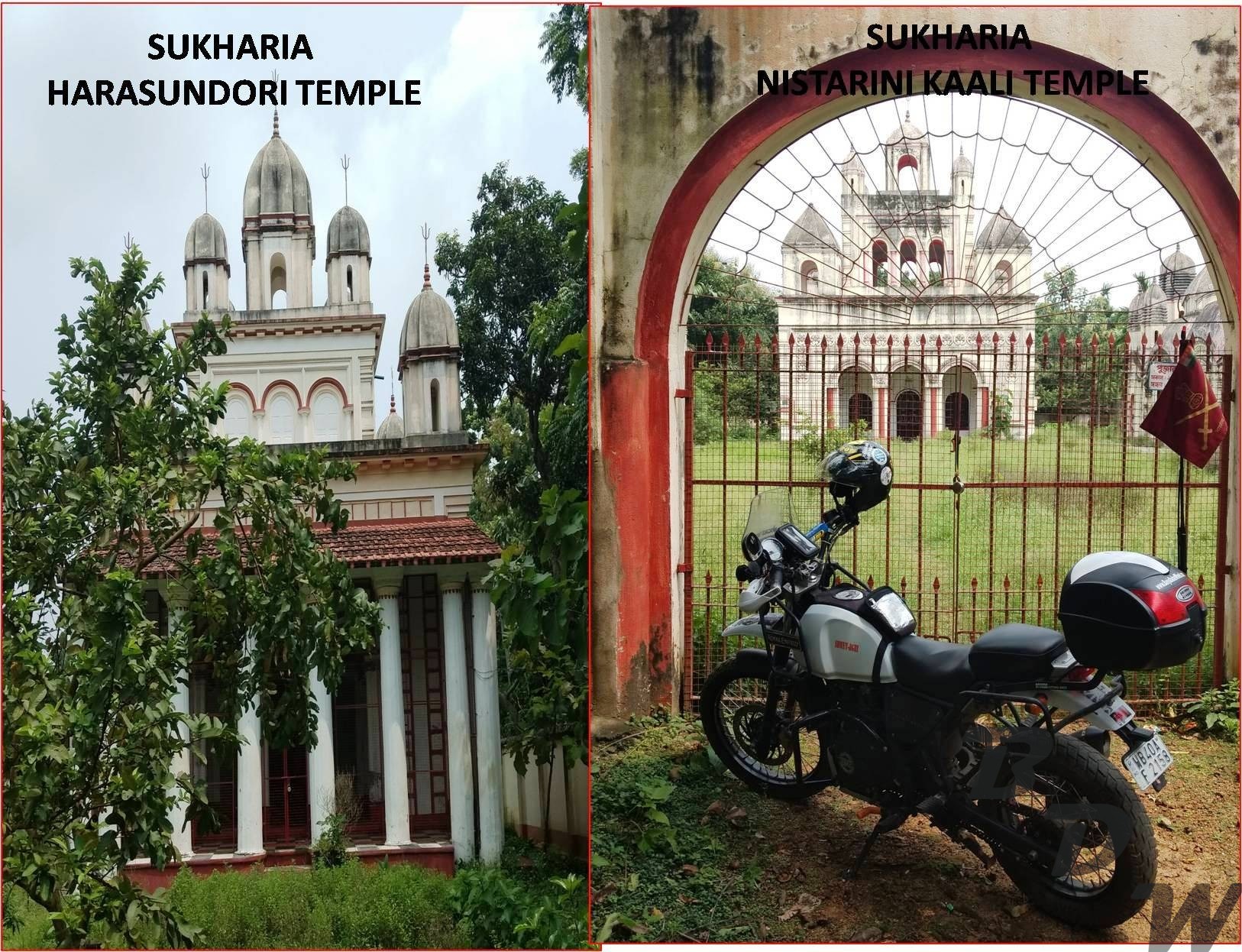 At the Siddheshwari Temple.
Local folklore says that a very tall fair man one sudden day started his meditation under this famous Banyan tree. He attained moksha and thereafter found the statue of Maa Siddheshwari buried on the river bed. He made a small temple and started worshipping the Goddess in situ. In later years, the Mitra-Mustafi family reconstructed the temple and started looking after the temple affairs.
The cool Riverside is indeed a welcome break amidst the daily wordly din … Staying here, moksha should not be too difficult to attain … 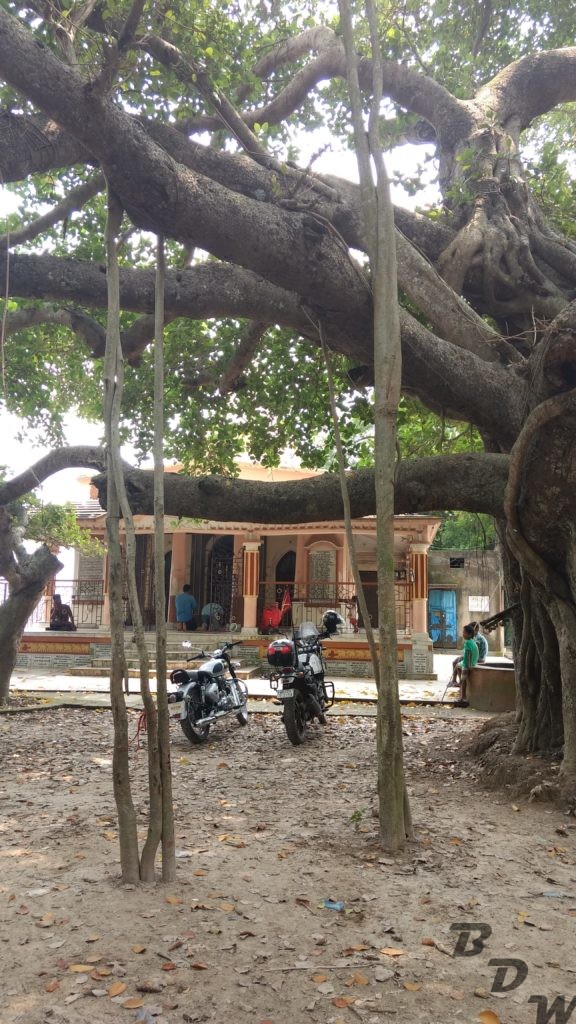 Often misunderstood as the Mitra-Mustafi mansion of Aurungzeb’s Munshi (accountant) fame, this is actually is the Ghosh family ruins called Radhakunja … I can write an entire series only on this mansion with detailed pictures. It’s straight from the Fairytale book …this feature I’ll write soon with some outstanding photos …. 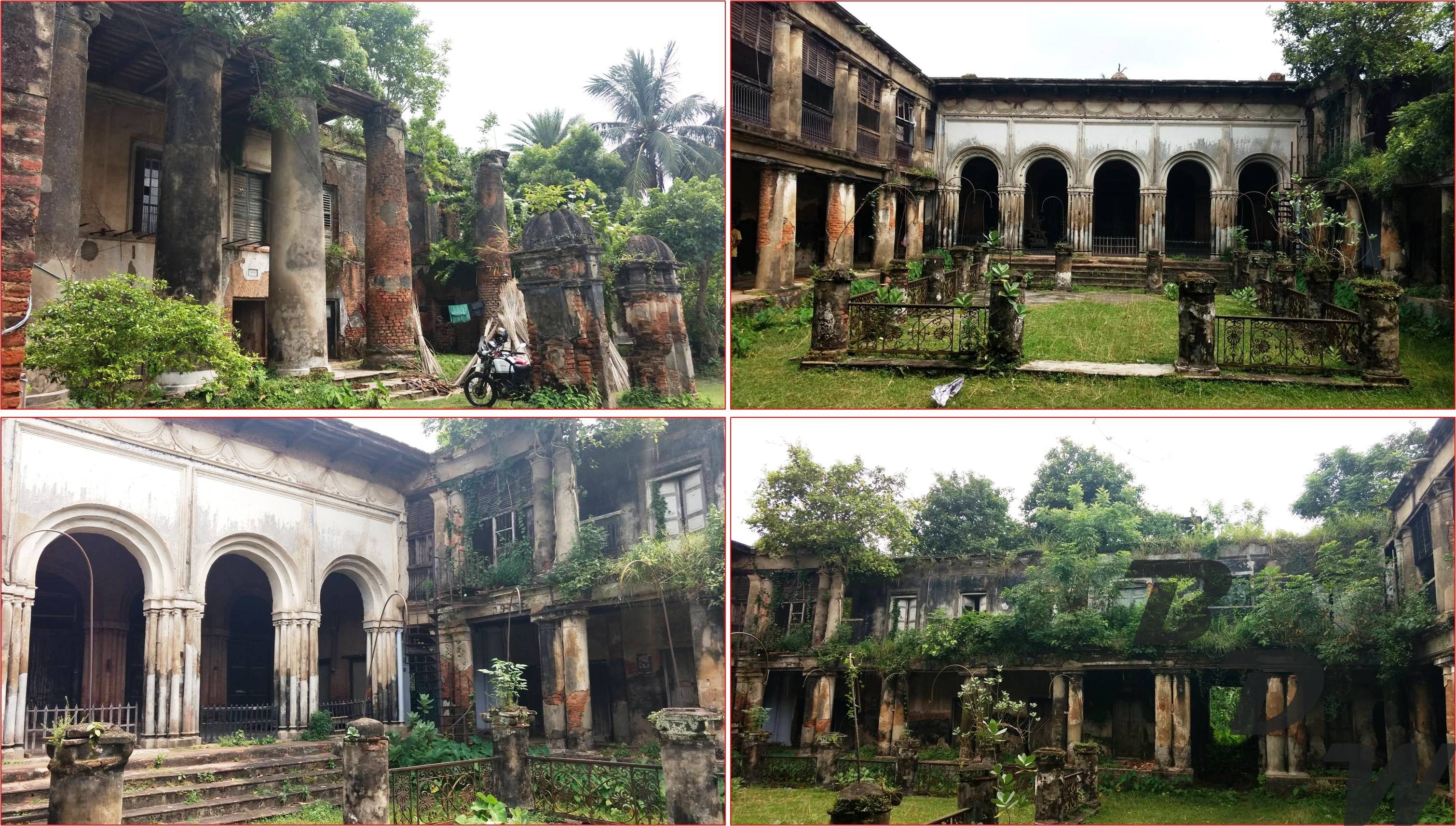 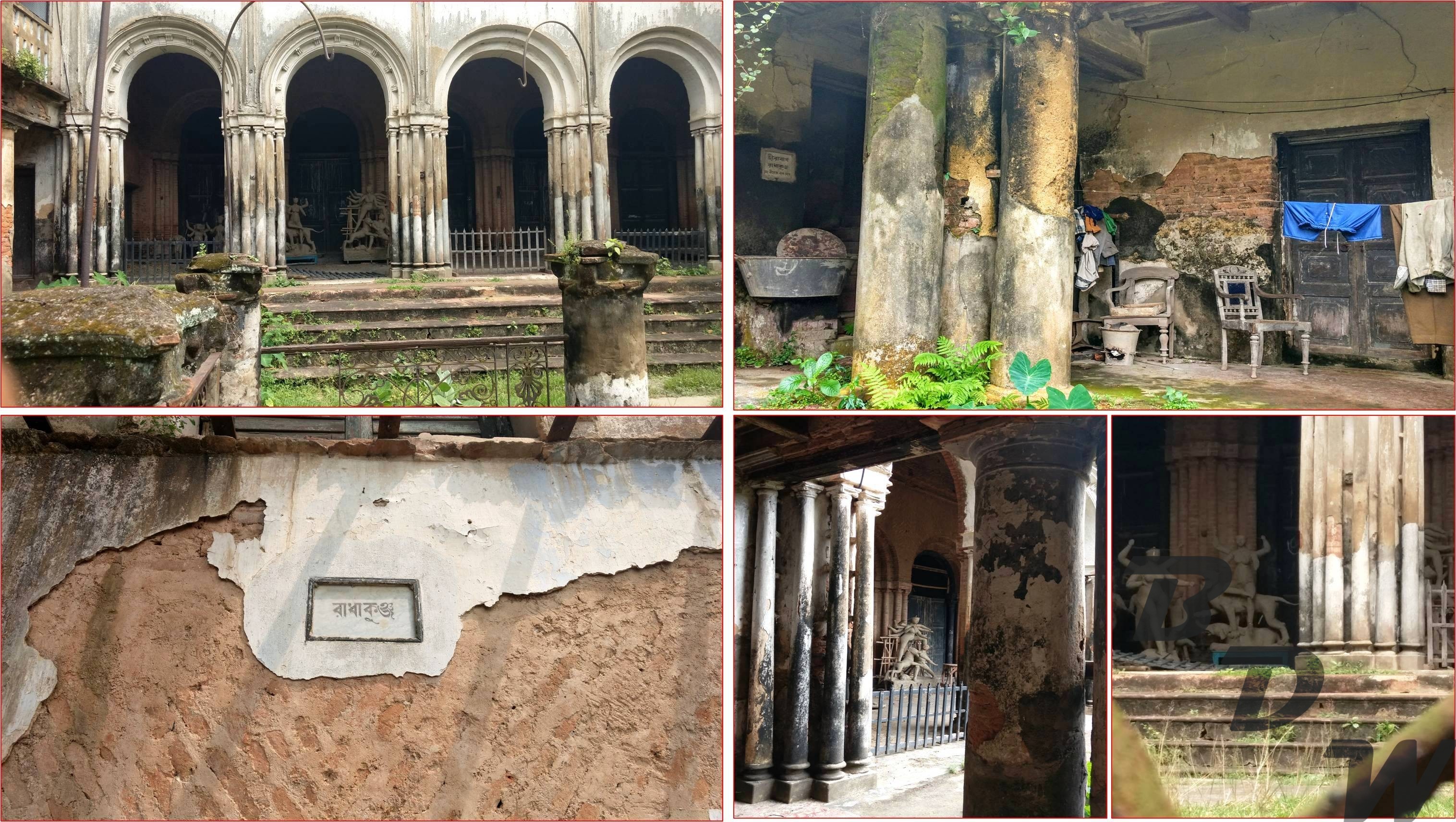 Sabujdeep is an attractive winter picnic spot in Hooghly district of West Bengal. The place is full of greenery and is fairly large island at the middle of water. The place is near Bolagarh and Somrabazar station at Hooghly. It is at the meeting point of Behula and Hooghly River. The boatman charges Rs 25/- per head to drop you in sabuj deep and bring you back. You have to book the picnic spot for a group picnic. Picnic spot charges are Rs 50/- for a group of 25 people. You have to give Rs 2/- per head, for more than 25 people. There are numerous lush green trees like Arjun, Mehagani, Ukaliptus etc in the island. The boat ride on the river is also enjoyable, and shouldn’t be missed.

At Sripur, Bolagarh .. the hub of the boat building small scale industry of Bengal. Bengali Boat-Craftsmen were experts in building #Bajra #Shalti #Shampan #Nouka #Chhip … All different types of boats … To put the British expertise to shame.
Was so proud to see that Boat building tradition of Bengal is still going strong.
Thinking seriously, shall I sell my SUV and buy a boat ??

Reached home safely, after 262 km of Sunday ride, sore bum and sweating like a horse (the last three hours, heat and humidity was terrible). Nevertheless, happy since a Travelled man is a wise man. Getting to know Bengal much intensely.
Budweiser calling … Cheers … Wind on your and my face …. Over and out. 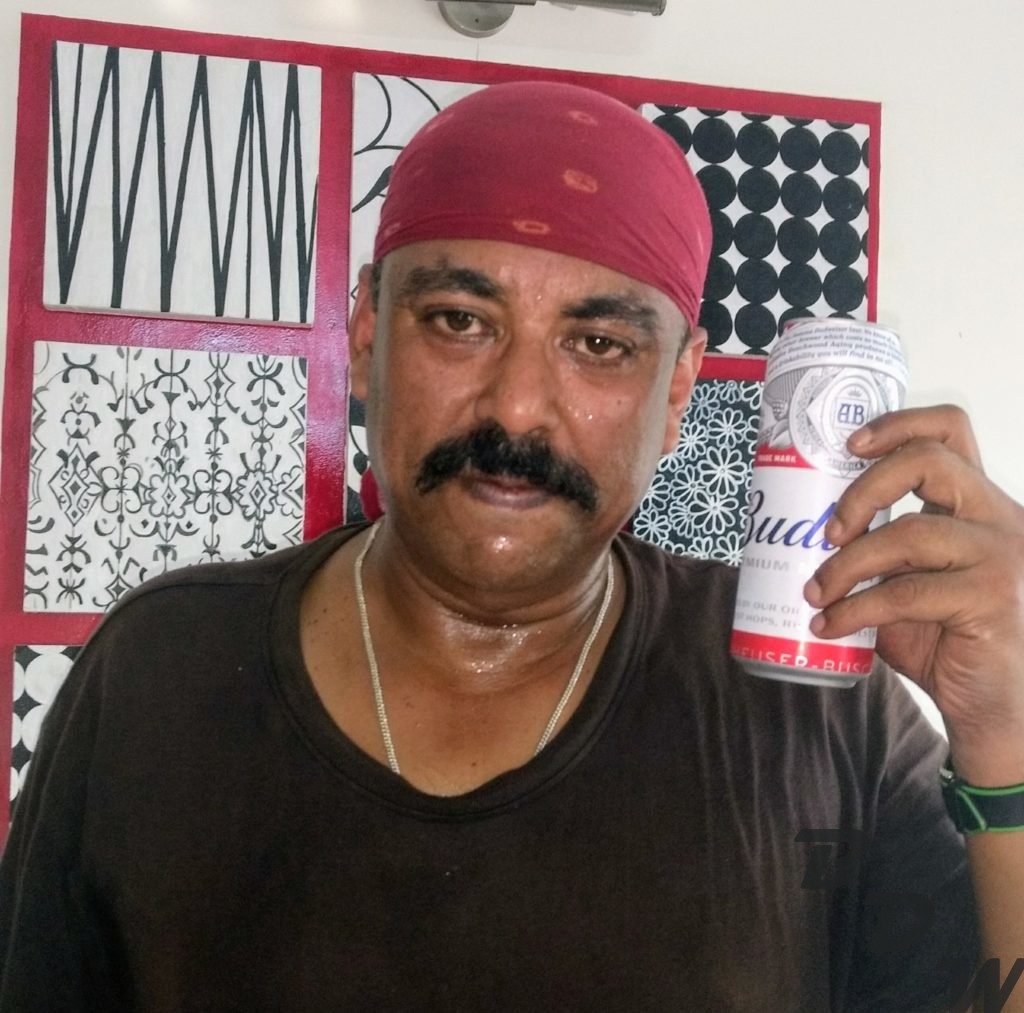