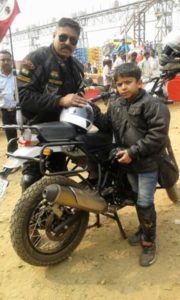 NEW YEAR RIDE (Father & son) TO ANDERSON WEIR (A weir /ˈwɪər/ is a barrier across a river designed to alter the flow characteristics; still allowing the water to flow freely above it) To begin the year with a small albeit significant ride, my son Bullet and I on Shwet-Agni rode to an interesting feature called ANDERSON WEIR on the Damodar River, popularly known to the locals as RHONDIA DAM. The joy of going to a new place was shortlived since its a popular picnic destination for locals … With at least 30,000 people doing picnic, buses teaming around, 40 odd microphones blasting out all different Bollywood numbers together, young dudes swigging whiskey and young girls smiling nervously. The serenity and beauty of the place could not be completely destroyed by the picnicers, the imposing piers, old British machines, the flowing river with beautiful sandy banks and small rapids were still awe inspiring. Other than the ride through a terrible No-Road which the Royal Enfield Himalayan tackled easily, the highlights were my son Bullet’s awe in seeing Motorcycle laden ferry boats, seeing and eating Star-fruit (Kamranga in Bengali) and a 40 minute boating on the River Damodar. Though crowded and not very peaceful, Shwet-Agni as usual had huge admirer crowd with the usual questions …. Kitne ki hai .. and … Kitna deti hai … and we Father and son had a good time overall. Let the New Year bring peace … and lots of new rides ….