#Dada_in_Rakhigarhi. Today morning, on my way back from Hisar to Jaipur, I had decided to take my first pitstop in Rakhigarhi village, the sensational Indus Valley Civilization site, which has created so much tremors in world history. I started at 0500 hr, when it was still dark and reached the village short of Jind, after about 90 minutes riding. Road is good except for maybe the last 1 km inside the village and 200 metres of offroad to get on top of the mound itself. The site cutting is closed and covered with earth as expected; however was pleasantly surprised to prominently identify the edge of the dug site due to the end of the polythene sheets protruding out along the edges. Standing on the mound itself, a shiver ran through my spine… Only to think that at 6500 BCE, at the exact spot.. My ancestors thrived, lived, loved, died. 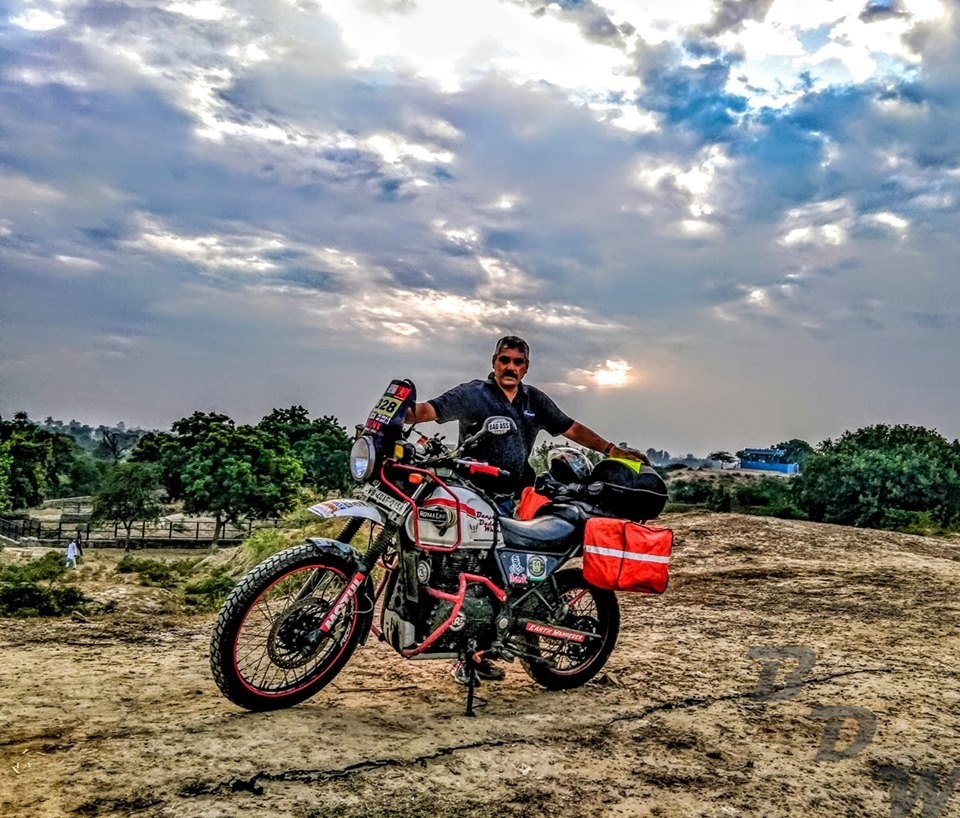 #General_Info. Rakhi Garhi is a village in Hisar District in the state of Haryana, situated exactly in the middle of State Highway between Hansi and Jind, on the plains of Ghaggar (ancient name is River Drishadvati) and Hakra river. Rakhigarhi includes a set of nine mounds, and there are many more settlement mounds in the immediate vicinity. Estimated to be of the size of approx 350 hectares; thus making it the largest Indus Valley Civilization site, surpassing Mohenjodaro (300 Hectares) by almost 50 hectares. In May 2012, the Global Heritage Fund, declared Rakhigarhi one of the 10 most endangered heritage sites in Asia. I myself found that the site is not being looked after, the iron boundary wall is broken, and villagers sell the artefacts they dig out of the site and parts of site are now being encroached by private houses, not surprisingly; since the site is bang in the middle of the village itself. The villagers had always, and still today use it as a place for morning defecation (inspite of a successful Swacch Bharat initiative) and use it to stack their cowdung and cowdung cake (ঘুঁটে). The villagers are generally poor, cattle tenders and farmers, and very friendly inspite of their wry Jat humour. 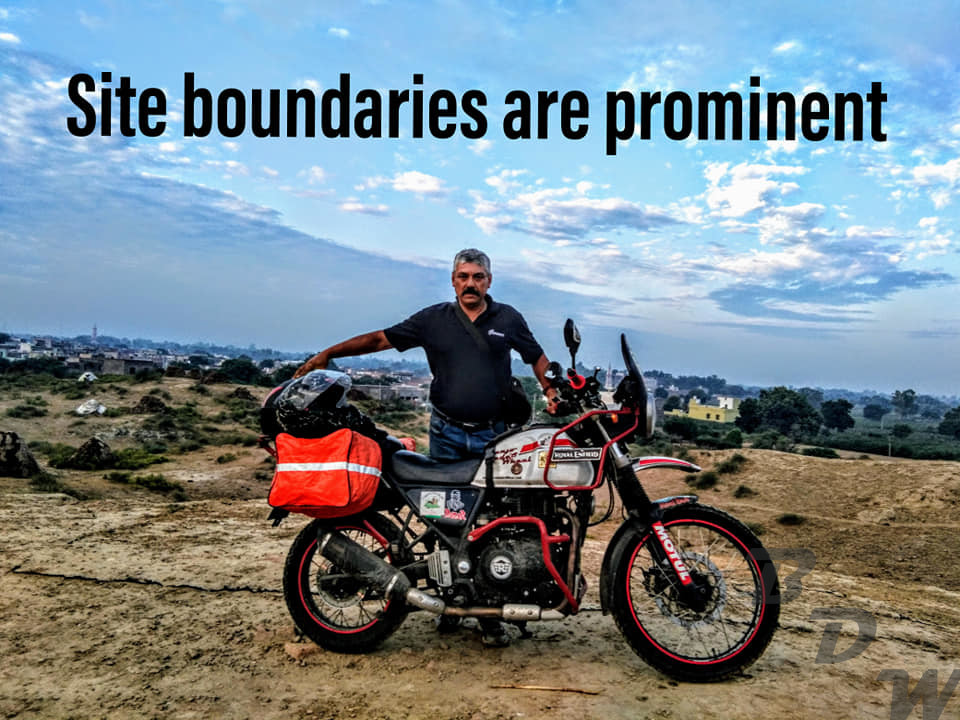 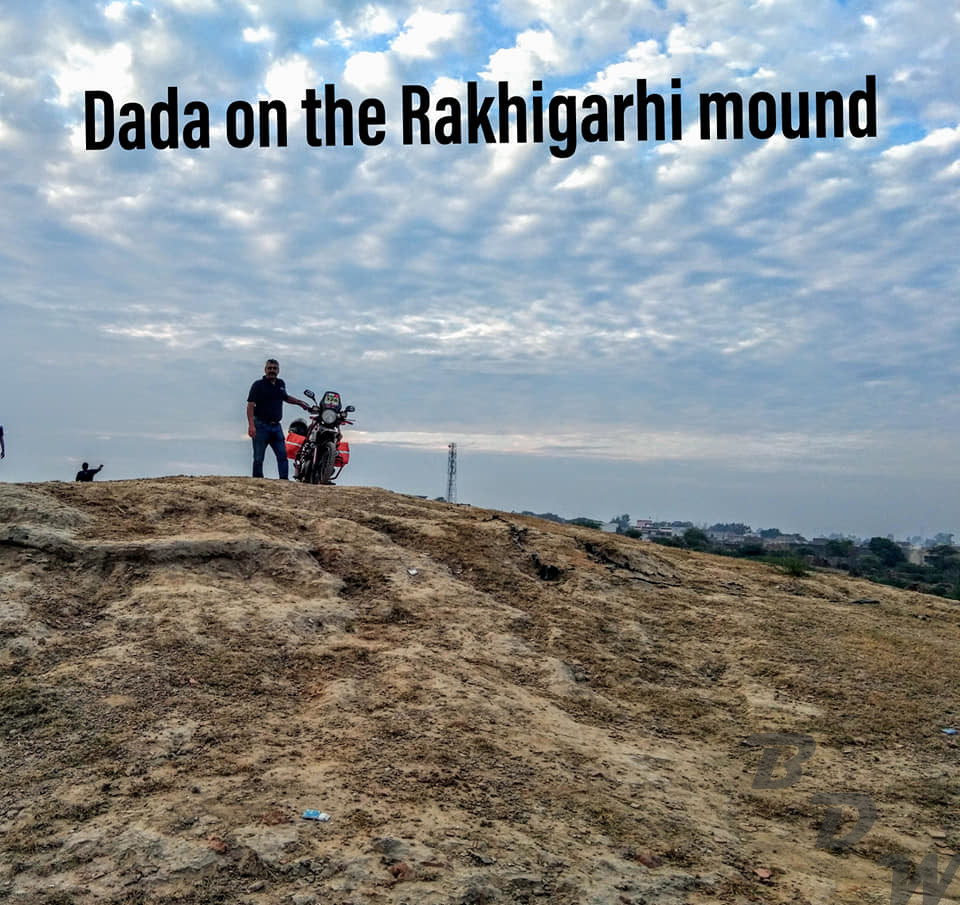 #Excavated_artifacts. The ASI’s detailed excavation of the site revealed the size of the lost city and recovered numerous artefacts, some over 5,000 years old. Rakhigarhi was lived in, at Early Harappan times. Evidence of paved roads, drainage system, large rainwater collection, storage system, terracotta bricks, statue production, and skilled working of bronze and precious metals have been uncovered. Jewellery, including bangles made from terracotta, conch shells, gold, and semi-precious stones, have also been found. Six published radicarbon datings reveal the lived period from 6420 BCE to 4280 BCE. 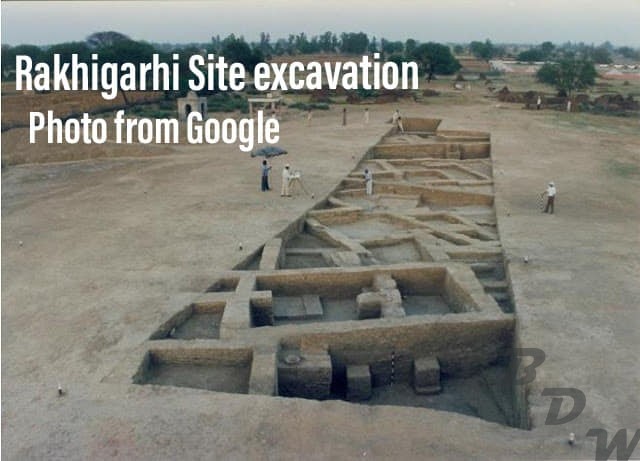 #Revealations. Digging so far reveals a well planned city with 1.92 m wide roads, a bit wider than in Kalibangan. The pottery is similar to Kalibangan and Banawali. Pits surrounded by walls have been found, which are thought to be for sacrificial or some religious ceremonies. Fire was used extensively in their religious ceremonies. There are brick lined drains to handle sewage from the houses. A huge public granary has also been unearthed. Terracotta statues, weights, bronze artefacts, comb, copper fish hooks, needles and terracotta seals have also been found. A bronze vessel has been found which is decorated with gold and silver. A gold foundry with about 3000 unpolished semi-precious stones has been found. Many tools used for polishing these stones and a furnace were found there. A burial site has been found with 11 skeletons, with their heads in the north direction. Near the heads of these skeletons, utensils for everyday use were kept. The three female skeletons have shell bangles on their left wrists. Near one female skeleton, a gold armlet has been found. In addition semi precious stones have been found lying near the head, suggesting that they were part of some sort of necklace. 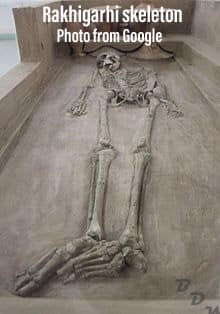 #Museum. A museum is under construction since quite few years but progress is slow. May God grant an early finish to it. 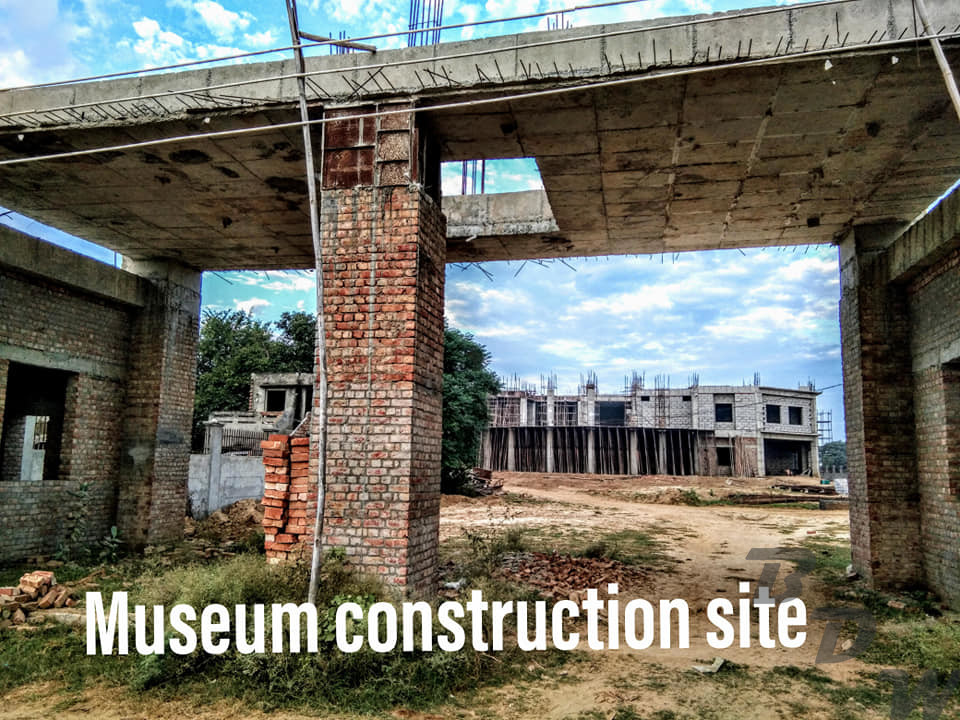 #Endpiece_and_Thoughts. Why did I go there? I knew that I shall only see a mound amidst a poor Haryanvi village and nothing else. Why I went.. will actually explain who I am and why I ride. While many may just feel disgusted because there is no scenery, no Tso, no La, no record, nothing to click photo of… Then what??? Just standing on the mound… I was shivering… People lived here in 6500 BCE. Thats 8500 years ago… and they were an agro-urban society with much much much more developed and established social system than most of the ancient civilizations. Do you get that?? Well… If you get it, you get it… If you dont, you dont.